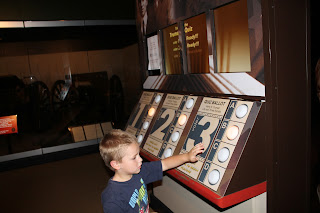 Friends, today I would like to be spending it running in circles at the Harry S Truman Library Museum in Independence, MO.  Do you know why?  Because the “Buck Stops Here”…You got it folks, this state of an art museum has something for everyone and you could truly spend hours roaming through it.

This past Summer when it was warm outside…sighhh…The kiddos and I had the opportunity to spend a few hours at the Truman Museum and as you know my sidekicks are often  have 10 X more energy than I do and  they loved this place.  They loved it so much that they begged to stay and then begged to go back.


The museum is divided up into sections and several sections were way over the head of D-man who is 4 and Lesse who was 8, but others sections captivated them and held their attention for much longer than I expected.  I honestly felt sorry for the lady who accompanied us to the museum as D kept her trapped at one exhibit for probably 30 minutes.

The section of the museum that I felt was focused more toward the youth is the Harry S. Truman: His Life and Times, this is permanent exhibit highlighting the personal side of Harry Truman our 33rdPresident.  Children get the opportunity to see the life of Harry Truman from just a boy until his death in 1972, they learn about his first job, his family, and his political career.

The exhibit Truman: The Presidential Years was way over D-man and Lesse’s head; however, momma was very much intrigued by this exhibit.  The Presidential Years focuses on the major issues and events of Harry Truman’s Presidency.   During the Truman Presidency, if you are history buff like my Dad…NOT ME, you will recall President Truman while in office made the decision to drop the atomic bomb on Japan, much of Europe was in extreme poverty, and the Cold War turned hot.  You could spend hours wondering through this beautiful, very informative, and well-designed history lover’s paradise.
The museum also has temporary exhibits that change out through the year, while we visited we got a glimpse of Tracing the Truman’s: An American Story, focused on Independence, Missouri and it’s two most famous families.

The Harry S Truman Museum Library and Museum is open Monday through Saturday  9:00 am to 5:00 pm,Sundays from noon to 5:00pm, and they run special summer hours.  The museum does cost to get into and is often closed on holidays, for a complete list of details, and information visit their website.
Have an Adventurous Day,

Disclosure: our trip to the museum was sponsored by the city of Independence Missouri, but all thought & opinions are my own.
at December 20, 2013