Hi it’s just me.  I feel like it is has been ages since I actually used this silly little blog I built.  That was what I use to refer to it as.  When I was secretly proud of The Missouri Mom, but thought I annoyed people.

Lately inside of me there has been a war, a war for writing, a war for overcoming, and a war for why I even care what people think about me.

I didn’t build The Missouri Mom for attention.  I built it to share my experiences as a mom, a woman, and a person, in hopes to help others navigate similar obstacles I faced.

A lot has changed since my first post, but nothing has really changed.  I still want to help people and I still help people every day.  It is my calling.

But why no writing?  No Blogging? Embarrassment, Social Pressure, Idea Differences.  Below the skin level, I am a people pleaser.

Every week I think back to the day I received a copy of one of my articles, with my daughter's picture attached to it, at my home address.  I held that letter with tears rolling down my cheeks.  I needed to give it all up; someone thought I was dumb.  I called my editors who all begged me not to quit but suggested I take an alias writing name.  We jumped through hoops, confused the world, and to this day I find the whole mess annoying.

I later learned through conversations the letter likely came from a close relative that still to this day takes jabs at me on social media.  Battle Wounds.

I hide, they win.

He blamed me, I blamed him, no one blamed the fact that I likely got pregnant the night I met him and were not matched equally.  The only things that survived that mess was two amazing children that God gifted us and lots of life experience that I could use to help others.

During that dark time, I went on a luxurious press trip to Dallas, Texas and Grapevine, Texas.  Stayed at the Omni in Dallas, there were televisions in the bathtub, and we snuck into Jewel's concert.  It was a trip of a lifetime; no it was the trip my life needed at the time.

I remember sitting amongst a group of fellow writers and discussing Instagram and Facebook.  When a writer I barely knew but respected said “where is Becky, I barely know her, but I know her.  Her pictures are so real, her post are so real, they are raw, and I feel her message.”  I was puzzled.  I was just an amateur writer enjoying the tide and press trips across the nation, but I was also a mom learning to navigate poverty while going to college and working side gigs as a travel journalist.  It was tough.  It was real.

What the fellow writer really meant was I was not influenced.  I didn’t care what the world thought of me.  I might have been too broken to care.  I just wrote without regret.

Unfortunately, society slipped back in, and the rules came back around. I caved.  I will likely cave again and again over the next forty years of my life.

My husband and I still laugh at the day I was confronted in the grocery store by onlooker that felt the need to tell me the chamber lady was sleeping with one of the aldermen.  I held out my hand and said, "hi I am the chamber lady, my husband is Alderman Trey, we do share a bed regularly."   Probably not one of my finest moments or hers, but I clarified the gossip quickly and felt rather proud that I could be so openly honest.

A close friend of mine and I regularly say "we do not do 3rd grade drama" we don't, unfortunately we deal with 3rd grade drama daily.  Everyone does.  I can usually gauge when the drama is going to hit.

If only I could win money as well as I could win attacks.  Last week, I got a surprise phone call from a fellow journalist that I had connected with years ago.  He follows my page, I have sent him tips on good stories in other areas, it is a connection to the outside world.  He had read a press release regarding the building my husband and I had recently purchased and converted into Santa's House for the holidays in honor of those who served our community before us.  I told my friend just moments after the interview finished "heads are going to turn" and it was less than 4 hours after the interview first aired that I saw the first not nice comment.

Over the weekend, I hunkered down.  I avoided social media.  I stuck to myself.  When people would greet me or comment I would try to pretend like it was no big deal.  In reality, I was ecstatic the local news had picked up the piece. Not for me, but for the people it honored, for the people that came along and helped with the project, and the former building owners who helped me step outside of my shell and do more.

In 2013, just after that dark time, I moved home to my hometown.  It was a huge change for my kids and me.  It was a sad change for me.  I moved back, but nothing was the same.  Most of my classmates had moved away, because there were no jobs here.  Most of the businesses that I grew up shopping had closed. The familiar faces that I grew up knowing had gone on and nothing was the same.

I had taken up running, I don't run anymore - I should but don't, and was out for a run-down First Street of what use to be Lutesville, Missouri.  I ran past what use to be Mary Wallis store and thought about the pair of pin-stripped overalls I bought my daughter before Mary's store closed.  I remember they doted on my daughter, and we chatted about her helping me pick out a dress for Grandma Woodring's funeral.  Building after building had changed names or became vacant.  Town in sense had rolled up and moved out.  We lived here, but that was all.

My heart sank.  Not for myself, but for the generation before me and the generation after me.  The gap could not be filled.  There was no honor in this.  Everyone blamed someone else.  There was no guilty party, there was a guilty trend.  The glam of shopping big box and the sadness of factories moving overseas and pulling out of small towns.

I knew that day, I was sent home.  I didn't know why; I didn't know what would become.  I knew that the years of travel writing, blogging, and photography on my silly little "The Missouri Mom" that I did under an alias name that I was embarrassed to have would come into play sometime somehow.

I was 3/4 of the way through my college degree, social worker by trade, and it was time to take an internship.  I put down my silly little The Missouri Mom and went to work - in the field, learning all aspects of community work.

God pulled another card out of my deck and matched me with a man; a man that would tolerate unorganized chaos, never-ending projects, and love for others.  In 2016, we had our dream reception in my hometown, in a building that will forever be close to my heart - and is unfortunately for sale, but if you are looking to buy it is a great place to invest. 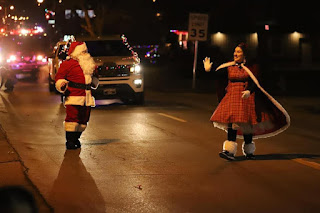 Around the same time as our wedding, I received an unexpected phone call from a campaign committee formed by the Bollinger County Chamber of Commerce.  They knew me, they knew The Missouri Mom, and they wanted to know if I could help them out.  Within days of that phone call, I was elected the President of the Bollinger County Chamber of Commerce.  I won't say it has been all sweet and sunshine, there have been hard days, mistakes, and lessons learned - but as a community we have accomplished a lot.  I will say of the same buildings that sat empty in 2013 when I ran down First Street, 3 are all that is left empty, and we purchased one of them last week.  The other empty buildings are either occupied or scheduled for an upcoming project.  Our community has worked hard.

I finished my degree in 2019, my life changed forever two weeks later with the death of my beloved Mother-in-Law.  She was like no other, raised 5 boys, cooked like Paula Dean, and never thought an ill thought of me - except the time I refused to let her "come take care of me after surgery" and she got mad and drove to South Carolina to see Trey's brother.  With her death, I took the roll of caregiver for my father-in-law; he was suffering early stages of Alzheimer's and recently had a stroke.  He lived a beautiful eighteen months in our home with us and quickly became the town, Papa Tom.

In January of 2021, we learned unexpectedly he had cancer, severely.  Less than 48 hours of learning his diagnosis he peacefully left Earth and joined his beloved Mary Margaret in Heaven.  It was a beautiful reunion, I am confident.  However, his leaving left me tired.  I had spent two years of caregiving and then helped my husband closeout his father's estate.  It was grueling time-consuming ordeal that drained me.  I had spent 7 years working for the State of Missouri in a stressful career, which 2 of those years were while I was caregiving for my in-laws.  I sent the HR Department a request for an unpaid leave of absence, in which they told me could not be met, I would be required to file for disability.  I was not disabled, I was tired.  So early one morning, I counted up my vacation days, and I wrote my resignation.  I needed to be somewhere else.

In September 2021, I signed my first lease on a building on First Street in the former Lutesville, Missouri.  I took the same values as Mary Wallis and strived to provide a service at an affordable price for my community.  I wanted people that lived close to me to want to shop my business and take advantage of quality items for an affordable price.  In August of 2022, I co-signed my second lease on a second building for a second business that opened in September of 2022.  My dear friend and I desired to give others a place to sell their goods for an affordable price while adding attraction to our town.  We wanted to give back and do good things for others.

Sunday morning, with my leg wrapped due to an unknown lump on the side of my knee that I am being treated for, I limped into church.  I didn't really want to be there.  I felt eyeballs.  I felt assumptions.  I felt like people thought I was greedy.  I wore the Battle Wounds.

I only stood through one song, I had forgotten to take my pain medicine, so I sat down.  I listened to the lyrics of the songs and the Advent Message being spoke - I tried to hide the tears that were filling my eyes.  I looked at my two mentors playing the piano and organ (mother and daughter) and wondered how they survived all they went through - they are so strong.  The Pastor's Daughter sang the song from the movie "I heard the bells on Christmas Day", and I was reminded there is no Peace on Earth, only Peace in Jesus.