I use to Hate Duck Dynasty, now I respect them.

I am not much of a "fad" follower and when I first heard about Duck Dynasty I assumed it would be just another fad. 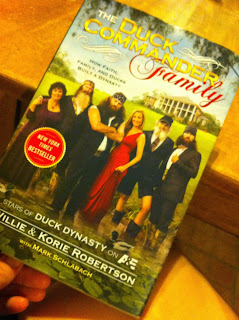 Then suddenly my kids (ages 5 & 9) started watching Duck Dynasty, so I was forced to sit through hours and hours of the show.

The show gets on my nerves, I believe lot of the things that happen on the show is just for TV.  I also believe that most of the Robertson family flaunt their money.....many "rednecks" that follow their show will never be able to afford the flashy things they own.

While I can still not say that "I love Duck Dynasty", I can say I genuinely RESPECT their family. A few weeks ago Lesse (age 10) came in packing The Duck Commander Family book by Willie & Korie Robertson.  I first rolled my eyes, then I noticed how "into" the book she was.

I am still not "sold" on the Duck Dynasty show, however, I would like to thank the Robertson family for opening up and being honest about their life.  They are in societies eye, but they still hold true to their faith, their beliefs, and their values.   I dig that!

To my readers, I would suggest  you pick up their books, read a few pages, you might find yourself connecting and having an aha moment!